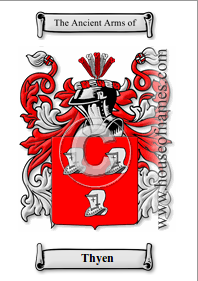 Early Origins of the Thyen family

The surname Thyen was first found in Banffshire (Gaelic: Siorrachd Bhanbh), former Scottish county located in the northeasterly Grampian region of Scotland, now of divided between the Council Areas of Moray and Aberdeenshire, where they held a family seat from very ancient times, before and after the Norman Conquest in 1066.One of the earliest records of the family was Philip de Thaun ( fl. 1120), the Anglo-Norman writer who probably belonged to a Norman family of Thaun or Than, near Caen, but had come to England, perhaps with his uncle Hunfrei de Thaun. [1]

Early History of the Thyen family

Spelling variations of this family name include: Thane, Thain, Thaine, Thayne, Theyne and others.

More information is included under the topic Early Thyen Notables in all our PDF Extended History products and printed products wherever possible.

Migration of the Thyen family to the New World and Oceana

Some of the first settlers of this family name were: Thyen Settlers in United States in the 20th Century